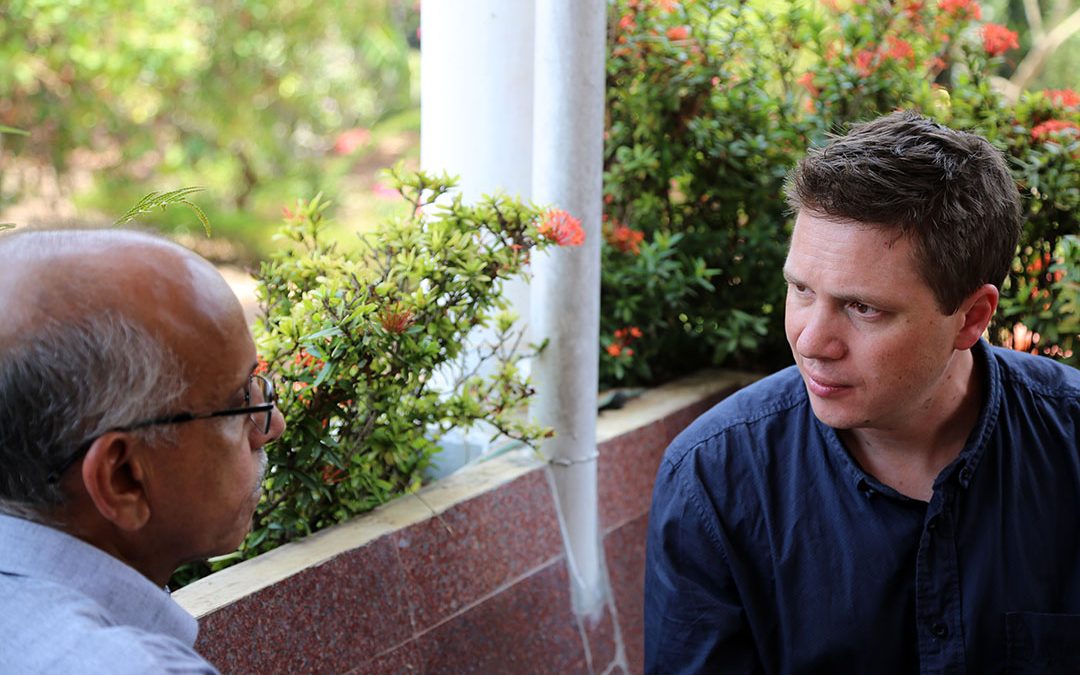 In 2009 I met Dr Raj.  The experience profoundly shaped my perspective on life.  I was immediately struck by Raj’s gift for speaking from the heart about finding meaning through service to others and  I feel passionately that this wisdom needs to be shared.

Since that time I have been crafting Hippocratic, a feature film that speaks about the human condition through  the eyes of this singular Indian doctor.  I believe this film can do a great deal of good in many ways.  It has the potential to fan the flames of a social movement that will enrich countless lives.

As for many of you reading this, Dr MR Rajagopal holds a place very close to my heart.

I first met Raj in 2009 in Dublin where I interviewed him for Life Before Death. I was immediately struck by Raj’s gift for speaking from the heart about pain, suffering and palliative care.

Later I travelled to Trivandrum to film with Raj and was struck yet again by the man’s exceptional range. By that time I had the privilege of capturing palliative care stories in 10 diverse countries. Wonderful palliative care professionals, advocates and activists of multiple disciplines were doing tremendous work wherever I went.

However I had never witnessed a single person doing what Raj was doing – attending to patients in the clinic, in the community and in their homes, as well as lobbying Governments, drug controllers and the global medical industry to bring about change.

This remarkable ‘bottom-up, top-down’ agility started to make more sense to me after I discovered that one of Raj’s key mentors was Mahatma Gandhi who had achieved the same remarkable range.

On face value it may seem odd that an Australian director with roots in the South Pacific is making a film about an Indian doctor.

However, my journey to this point has, at every step, seemed inevitable.  As international advocate and documentarian, the paths of Raj and I crossed so many times in so many corners of the world during our early years that my suggestion to make a biographical film was met with a simple “of course”.

I know of no other filmmakers who have dedicated so much of their careers to exploring how we die around the world than my team and I.  We have covered this theme in a myriad of ways in over 20 countries through stories of the young, the old and those in between.  And what we’ve learnt is that there is so much more to be done to develop a universally accessible system of ethical, compassionate medicine that has the power to eliminate unnecessary human suffering and transform the world as a result.

Raj’s story promises something singular.  The opportunity to explore this theme through the story of an individual doctor of exemplary compassion and capacity.  One person who embodies the mission and principles of an entire movement that seeks to revolutionize health care.  A man whom dozens of global leaders, giants in their own rights, are currently banding around to support a nomination for the Nobel Peace Prize.

By telling this small but epic story, we believe can activate a general audience and inspire a generation of health professionals and shape the world for a better tomorrow.

–  The film is broadly distributed through the mass media and ‘ethical medicine’ is reported widely in the mainstream press driving grass roots understanding and demand for pain and palliative care services.

–  The film becomes a fixture in the curriculum of doctors and nurses worldwide informing generational change in the ways health professionals practice.

– Targeted strategic events  raise the profile  of access to affordable health care, compelling policy-makers and industry leaders to action positive social responsibility initiatives  placing them on ‘the right side of history’.

In short, success is contributing to a world without unnecessary suffering.

Thanks for joining me on this journey!